Waste from the increased activities of speedy means of transportation has led to an increase in environmental degradation. The relationship between the various means of transport and environment is implacable. Efficient travel means better goods and services, raw materials and open exchange of people. However, the systems responsible for the exchange have exerted pressure on the environment while undignified the quality and functional unity of natural systems. This threatens the achievement and maintenance of life in a human being. 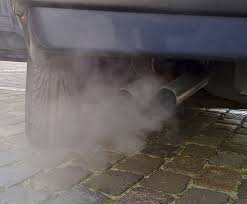 One of the major contributors to global warming is the release of greenhouse gases and co2 from vehicles. Trapped heat  in the atmosphere cause  temperatures to rise from the depleted ozone layer affected by the gases. The excessive burning of gasoline and fuel has and still is increasing drastically from pre-industrial times. The rise in temperatures affects crop farming and wildlife while affecting the natural landscapes and sea levels. The depletion of the ozone creates a space for harmful ultraviolet rays to reach the lower surface of the earth harming humans and other living organisms.

Vehicle pollutants such as Carbon Monoxide and hydrocarbons have negative impacts on human health. The high particulate matter emitted from diesel engines causes irritation of the eyes, allergies and respiratory problems from the fine particles penetrating the lungs. The reaction of Nitrogen dioxide and sunlight in the ozone layer becomes harmful if it reaches the ground. This reaction causes lung inflammation and chest pains. Smog arises from the mixture of these compounds in the atmosphere. Interference of the blood’s ability to transport Oxygen by Carbon Monoxide is dangerous to infants and people with heart problems. Noise pollution affects the psychological health and hearing ability of humans. A population that is unwell leads to stalling of the economy as growth is based on the ability of people to work.

The quality of soil, water, and air are affected by car pollution largely. Gases released such as sulfur dioxide and nitrogen dioxide create acid rain when mixed with rainwater. Apart from damaging crops, this rain contributes to the destruction of forests, vegetation, and buildings. The soil near highways is usually contaminated by spills of oil and fuel from cars and trucks. Additionally, the wetlands, lakes, and rivers also suffer from the same from discarded fuels and vehicle emission particles.

If you love to travel around the world, than check most secret and forbidden places to travel, it will increase your interest in travel.

Tourism is a service and experience hence good destination characteristics are important to attract tourists. It is therefore important for tourists to consider factors such as language, budget, political